If a barbeque for you isn’t a bbq without a potato salad, then I’ve got a 5 ingredient super simple potato salad recipe for you that ticks all the boxes.

This 5 ingredient super simple potato salad is sure to become a family favourite.

I grew up having potato salad as a side dish at every bbq. The one my mother made was made with mint and quite yummy, but the main ingredient was storebought potato salad dressing, something which I don’t use.

Instead, using mayonnaise (homemade or storebought)you have more control over the contents of the potato salad.

My kids like this, although in all honesty, Master 6 would never admit it. He put up such a show of hating it this week, but then stole half the portion I was eating as leftovers!

One of the best things about this 5 ingredient super simple potato salad is that you can prep it the night before, meaning you look like the host with the most when the guests turn up! It’s going to be your new best friend for taking to a BBQ as well!

BBQ season is the best time of year!

Break out the mozzie coils, turn on the bbq and get cooking! There are lots of things on the blog that work well on the BBQ:

And these salads are also awesome at a BBQ:

My top tips for a successful BBQ: 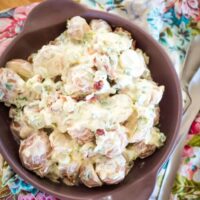 Variations: Can be made the day before