Jump to Recipe Jump to Video 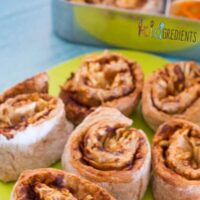 This post is updated! It needed a makeover. My kids have grown a bit since I did these, but they are still a favourite! These apple pie yoghurt dough scrolls are winners! I originally published this on May 6, 2015.

They are sweet and hit the dessert spot well, so they really are a sometimes food. Unlike the scrolls I make for lunches they also only contain white self raising flour as being a dessert they don't need to be as dense. I've used pink lady apples in these as they are what we had, but they would be equally as delicious with any other type of apple.

I had the pleasure of making these with the son of a good friend of mine. He was quite surprised that I was putting yoghurt and flour together and making a dough. He was also slightly worried about the whole concept as he doesn't like yoghurt. But he did get his hands all floury measuring the flour which he thought was fun.

Now, if you're on the anti sugar bandwagon, you can cut it back. I did use unrefined raw sugar, and to be perfectly honest as a treat or dessert that is eaten every now and then, I think it's fine. But feel free to adjust to suit your family!

Master 2 and Miss 4 loved these, I felt they would have been nice with the addition of some custard- but there certainly wasn't time for making any last night.

Can't get enough of these Apple pie yoghurt dough scrolls? Try some of my other scroll recipes below: 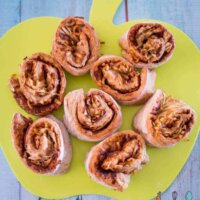 These are freezer friendly, just grab and go for the lunchbox!