Bruschetta is pronounced BRUS-KETTA. Not Brushetta. That's an important point. I could go into the many reasons why...but let's just get one thing clear: CHE in Italian does a KE sound like in kettle in English. I don't know how many times I've cringed in restaurants at the mispronunciation of bruschetta. And I will correct you...because I have a degree in languages and I know my Italian language! So, now that the pronunciation is out of the way...a few more rules. Bruschetta is a summer food. Tomatoes and basil thrive in summer. They have flavours beyond compare when they are used in season. Using them out of season makes a sad bruschetta. I'm doing this as a per person recipe. Because sometimes bruschetta for one is a great idea. It also allows you to make this recipe for however many people you want very quickly and easily. I allow two slices of a medium thickness baguette for this...but use what you've got. I draw the line at sandwich bread though, even when desperate...it goes too soggy! I like anything like a ciabatta, pane di casa or a good strong sourdough. This tastes best if you allow the tomatoes to marinate a bit, so try making it first thing in the morning for lunch.

Want more recipes with tomatoes in them? Then try these recipes below: 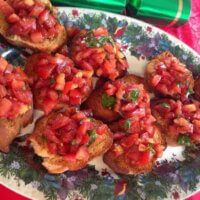