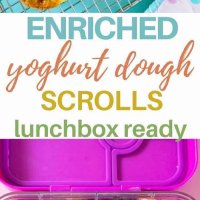 Two years ago I made these enriched even better yoghurt dough scrolls for the first time. They are still a favourite with Master 5 and Miss 7 and they are frequent flyers in our lunchboxes. They are super easy to make and freeze well as well has being super kid friendly. If you haven't made them before  like this, then this version is better for kids than standard yoghurt dough as it uses wholemeal self raising flour and is enriched with whole chia seeds. Both of these elements help to make them better than standard white flour scrolls. i know there has recently been bad press about cheese and ham in sandwiches, and yes, I get it, but scrolls mean that you use even less of the ham and cheese than you would in a sandwich. If you think scrolls could be a winner in your lunches, then check out all these versions, sweet and savoury! Here's what I wrote 3 years ago on 21/01/2015:  I've been reading everywhere people raving about yoghurt dough. But I haven't been inspired until now. You see Master 2 won't eat a sandwich. He will not touch one. If I'm lucky he will eat each of the sandwich elements separately ie the cheese, the bread and the ham as individual pieces. But more often than not it is just left by the wayside. Or worse chucked on the floor. He went to preschool yesterday with fried rice and cooked pasta and ate the whole lot. But I can't be making fried rice on mornings when we've got swimming, or other activities, it's too hard.

So I decided to try yoghurt dough scrolls. The premise sounded good, they were made with just 2 ingredients (one of which is my homemade greek yoghurt). So I made some yoghurt and got experimenting. 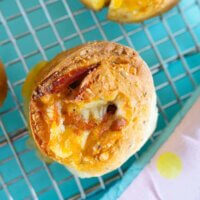