You know, meat pies are considered to be Aussie food. But, shoot me down, I've never really liked them. Why? Well... they are kind of mystery food. You never kind of know what's in them, you never really know exactly what they are going to taste like. For that reason, if I was out, I would always order a chicken, mushroom and leek pie. Mainly because without any detective work...I know what three of the ingredients are. There's no mystery with these yummy lamb and veggie pies! I've told you that Master 3 is currently avoiding green stuff, right? So...you'll be surprised when I say these were all eaten up, as in completely eaten, green stuff and all. And he has a green stuff radar that is so sensitive he can normally sniff out green stuff, so this is major progress!

I did my mince mixture in the slowcooker. But that's because I'm lazy. You can easily do yours on the stove top. The mixture does however really benefit from cooking long and slow. It means that all the flavours mature and you don't need to add any nasties. This mixture makes a lot of little pies, at least 20 or you could do a couple of family sized pies (maybe 5) or you could use it for shepherds pie. I've made mine with my pie maker, an investment I made last year at kmart that has paid for itself ten thousand times over. The beauty of this $25 wonder machine? You can cook 4 pies at once, no blind baking needed. And...if you need an and...you can reheat frozen pies in it, to get them up to the right temp for eating. The pie maker also seals the edges really well together! No soggy bases either.

You can never go wrong in serving pies to your kids. Here are other pie recipes I made: 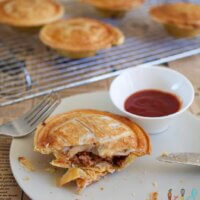 « 10 simple protein hits for the lunchbox, that kids will love!
9 ways to make veggies part of the lunchbox »