I love chorizo and the mini Kidgredients love chorizo. In fact every time we go to Havericks to stock up on meat for the month...the kiddies eat at least one Chorizo sandwich.

I always have a stash of them in the freezer as they are so versatile. They can easily go in pasta, rice dishes, on bread rolls as they are, and as I'm going to show you here, they aren't limited to being a main meal. The first time I tried Chorizo was at the Borough Markets in London on a roll with some garlic aioli, rocket and sundried tomatoes. I was hooked. When we went to Barcelona I ate them in the markets there too and also at dinner. I was hooked.

I was looking for something quick but tasty for dinner that used the potatoes in the cupboard as I has accidently bought more in a rushed shopping trip! So, this actually formed a friday night slap together dinner for all the Kidgredients as I was intent on using what we had rather than ducking out to the shops in the miserable weather.

This uses a lot of potatoes, so you might want to share it six ways as a side or eat it as dinner between a few! If you're worried about the chilli, slice it but leave intact then you can remove it at the end of cooking. Patatas bravas doesn't usually contain lentils, but I wanted to up the goodness in this one without taking away from the taste. If you didn't know they were in there, you wouldn't notice them as they blend perfectly into the tomato and the starchy potatoes. 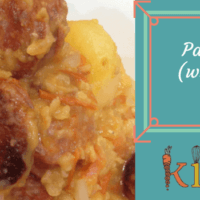 Patatas bravas (with a cheeky twist)