The raspberry and apple ice pops have veggies in them!!!

I was to bring dessert for a bbq on the weekend and wanted to make a tiramisu. My tiramisu is notoriously boozy...last night in particular...I used what I thought was a shot glass to measure the tia maria. Who knew that shot glasses you use for coffee are different to the ones you use for alcohol... LOL? Want to try an alcohol free tiramisu?

There was a lot of tia maria in the tiramisu.... Anyway. I decided that it would probably be best to make a different dessert for the kids...because although the alcohol may have helped them sleep (I'm joking- I don't condone alcohol for kids)...there was a strong risk of the coffee hyping them up (again, joking). So I made some iceblocks and got super sneaky. I made raspberry and apple ice pops (with hidden veggies!).

To be honest, it felt kind of cruel hiding vegetables in ice pops and watching the kids eat them with smiles. But I quickly got over that when I remembered...it's veggies. Veggies are GREAT!

Veggies are an essential part of the day and if they aren't going to eat them in the usual way...then we need to pull out all the stops. Here's a recent post that should give you heaps of lunchbox veggie ideas.

I think the main reason these work is because the colour of the raspberries hides both the carrot and the spinach...and the sweeteness of the apple helps with disguising it too.

Realistically, if they will eat ice blocks, they will eat these and then you know they are getting some good stuff, even if it is hidden.

I used my blitz to go again to make these and it handles the frozen spinach and the carrot with no problems. It did an awesome job of blitzing them!

I've popped them into My Lil Pouch resuable pops as well as I love the ease of use of these and the way that they actually make the pops freeze really quickly! They are perfect for little hands to hold.

Here are some treats with hidden veggies  I created -- kids won't even recognise it! 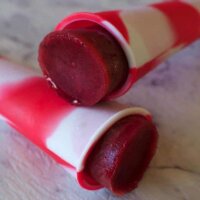 This post contains an affiliate link. That means if you follow the link and purchase, I get a small commission, but you pay the normal price, which in turn helps me to bring you awesome content like the recipe you just read!