Bologna: place in Italy (that has really nice tortellini). In a true sense, bolognaise sauce which would be the Anglicised version of Bolognese (meaning from Bologna) doesn't exist. But that's what we all call it here. It's kind of a ragu, or even a meaty sauce that can be used in many, many ways.

There's nothing better than something that can be used in lots of different ways. A sauce that freezes well, for instant meals and that can be used in almost countless ways. I make it in bulk. Feel free to halve if you don't think you'd get through it....but I think you'll be kicking yourself when you run out!

I pop it in the slow cooker, but if you want to you can continue to cook it on the stove, keeping an eye on it that the pot doesn't run dry. If you're feeling incredibly lazy (we all have those days) skip the fry pan and pop it straight in the slow cooker. The flavours won't be as intense, but you'll basically achieve the same thing.

For my onions and my mushrooms I used my Tupperware TurboChef to chop the onions and also the mushrooms. The mushrooms are a "foreign object" that will not be eaten by my kids unless chopped very finely. I love the nutritional benefits of the mushrooms though and the flavour that they bring to the sauce. If you want to omit them you can.

If you're cooking for a little bub, you can blitz this sauce in the blender or food processor. But don't blitz it all...because it makes a lot!

If you are a fan of making a sauce, then you can try making these other recipes: 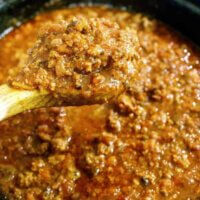