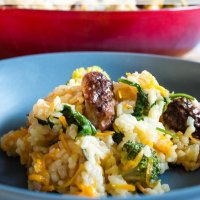 This baked sage and veggie risotto with cheats pork meatballs is sponsored by The British Sausage, Ham & Bacon Co. When it comes to weeknight meals, we often overlook risotto because of all that stirring!  But this Baked sage and veggie risotto with cheats pork meatballs means you can have dinner in the oven while you’re doing homework, and the million other things that you need to do of an evening. I love meatballs, but again, they take so much effort. Made using butcher quality sausages, these cheats pork meatballs mean they don’t have to be a weekend thing.  Another great thing about this dinner?  Yep, you should have enough for the kids to take as lunch the next day. It also freezes spectacularly, which is unlike most risottos. This means you can double batch and freeze. So really, what’s your excuse for not making risotto this week? Why turn sausages into meatballs?  Well, The British Sausage Co. has done the hard work for us binding the meat together in their Irish Pork Sausages, so it’s super simple to make meatballs from the sausages.  This risotto would be equally as delicious with their Cumberland Pork Sausages if you want an extra burst of flavour (they have sage in them too)! The British Sausage, Ham & Bacon Co. have an amazing range – all made in Australia with Australian meat, using authentic traditional recipes.  I love this because when we lived in the UK I became quite addicted to their smallgoods and sausages.  The British Sausage, Ham & Bacon Co. range includes ham, bacon and sausages, so there is something for everyone.  I got my sausages from Coles, they are available in different supermarkets depending on your location, so check out where to get them here. Getting so many veggies into the risotto means that you have ticked all the nutritional boxes for a great family dinner.  I find leaving the carrot, broccoli and spinach out until just towards the end of cooking means they don’t end up soggy. Do I need to convince you further? Well, here goes (and it’s a true story) master 6 loved this risotto!  And normally he only eats risotto under duress. But this baked sage and veggie risotto with cheats pork meatballs got a thumbs up on so many levels and has become a firm family favourite.