So, I'm not really a veggie smuggler. I'm a veggie encourager. I encourage my kids to eat them. But every now and then I decide to get sneaky and mix up the situation. I live videoed my kids eating these on facebook last night and promised you all the recipe. If you haven't seen the video, go and have a look as it gives you some funny serving tips. Anyway, these are the tastiest hidden veggie panko coated chicken nuggets ever and they are so awesome the kids won't even suspect they are hiding veggies! So these nuggets came about as I wanted to see how well I could hide veggies. I have to say, I have succeeded. It's the panko. It hides anything. And in the case of these, it makes them crunchy and anything crunchy always works better than anything not crunchy (according to Miss 5). I've filled them with day-before-the-grocery-shop veggies, you could play around with what you put in them, but the texture of the cauliflower with the chicken mince helps to give them more of a nuggets feel. You could just serve these with some sweet potato chippies, or even rice, because they do contain more veggies than the kids will probably offer to eat normally. But...and here's the but...you want to make sure they don't get suspicious. So serve them with veggies. Because you can make a big fuss about them eating the other veggies on the plate...and they'll just eat the nuggets. GENIUS! Give the kids some dipping sauce of your choice, we used mayonnaise at the taste test and homemamde bbq sauce when we had them for dinner. Dipping is such a great activity to include in dinner as it gives the control back to the kids. Plus they are less likely to spot any offending green or orange stuff in the nuggets if they are dipping. Because let's be honest...kids double dip.

Are you a nugget fun? Here are my other nugget recipes for you: 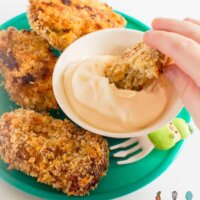