So, my post last week on honey soy marinades got me thinking...how many of these things are out there with things we really shouldn't be eating in them? And the answer is: LOTS. I'm going to try and do one of these a week for a while, until I've covered all the major ones that people are using.

Let's be honest. 100 years ago we weren't eating as many artificial additives and preservatives that we are today. With that in mind, it's important to me to try and limit the number of these numbers that I'm putting into my kids diets. If it doesn't interest you to know about these things, skip to the end, the recipe is awesome anyway.

So...I did a little investigating around the slow cooker facebook groups and found that honey mustard chicken bases are incredibly popular. I set about investigating them further:

So the nasty stuff (thanks to the additive alert app which is free to download on itunes or Google Play):

So if you still want to buy one, get one of the Masterfoods ones. But bare in mind they still have massive amounts of sugar. And that is on top of the honey in them.

Now, I'm not professing this is the healthiest meal on the face of this earth, but by using organic mustard, it contains...mustard and that's it. And mixed with a few other yummy ingredients, you've got a delicious marinade, slow cooker sauce or sauce for a one pot meal that tastes amazing and has no yucky stuff in it at all.

The kids gobbled this when I did the chicken breast, so I tried it on lamb shanks and I have to admit it was awesome on those too. It's a really easy to whip up flavour and you can even get the kids involved, helping to measure the ingredients and stir them together. So here is my take on honey mustard for lamb or chicken, the kids loved it and the fact that it can be used in the slow cooker or on the stove makes it extra versatile. 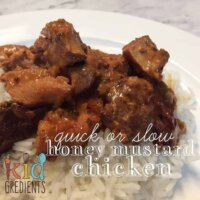 Honey Mustard (for Lamb or chicken)