All of a sudden the mini kidgredients are eating fish. I haven't actively encouraged it- there has been no warpath to convincing, they've just started eating it. And I'm not complaining. But I want to ensure they will eat it in many ways, not just crumbed or grilled, so I decided to try some fishcakes with fresh white fish. And they were a hit! Master 2 gobbled a few of these up and really enjoyed them. I've named them super duper fish cakes because they really must have been super duper to inspire the kiddies to eat them!

Miss 4 helped with the crumbing of the fishcakes which I have to admit was quite a difficult task. I also have to admit that I was very glad that she was the one who ended up with sticky gooey crumby fingers. It's hard for kids to turn around and refuse something they have been involved in, in fact Miss 4 only ate them because she "had to because she did all the hard work".

Now these little beauties are so yummy, you will be glad this makes a double batch. They freeze really well and also bake well from frozen, so great for stocking up the freezer with easy dinners.

Apparently they also look like little minions (which is what is hot at Kidgredients HQ at the moment...it's all about the minions) so Master 2 thought that was pretty cool.

If you want to try a different type of fish, try salmon or tuna. Deep seas bream has a similar texture to the red fish and blitzes the same as them without being too flakey (this is what sold me on it at the fishmongers). The fishmonger explained that it was also a great fish for freezing- another good point! 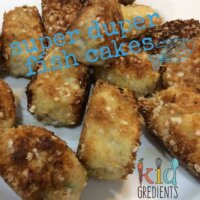