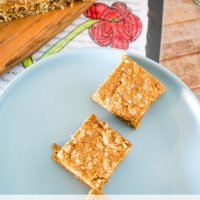 When it comes to classic Aussie snacks, it's hard to go past ANZAC cookies. But you can go past them when you are getting ANZAC slice instead. It's chewy, super sweet and so delicious! I am never so proud to be Australian as I am on ANZAC day. If you're not Australian or a New Zealander, you probably don't know what ANZAC day is...so let me give you the run down. The quick version.

Australians and New Zealanders joined the first world war with the landing at Gallipoli, young men from young nations pledged their loyalty to the Crown- a mythical beast thousands of miles away in Great Britain and joined the ranks of the army, with the promise of adventure and travel. Little did they know that they would die by the thousands on that beach in Gallipoli. Now, over a hundred years on, ANZAC day is a commemoration of all the people who have fought for our country, on every front since.

Interestingly enough, I had a step Grandfather born on the first ever ANZAC day and he had ANZAC as a middle name. He also ended up a prisoner of wear, not once, but twice during the second world war and was involved in the Great Escape.

So ANZAC day is super important, but where did ANZAC cookies spring from? So, mythology (lol) will tell you that they were sent by the wives, mums and grandmothers left at home during the war to the soldiers because they didn't spoil in transit. But they obviously weren't known as ANZAC cookies then.

It's more likely they were found on all the bake sales and fundraising efforts for the soldiers that were going on at the time. They are so simple to make, the melt, mix, bake method is the same as used in this slice. I've updated it with some quinoa flakes, but only because they add a really nice nutty flavour to the slice.

So give it a go, just like the ANZACs did and make this slice, you won't regret it!

If you really can't do this as a slice, I have a version of ANZAC cookies here for you too! 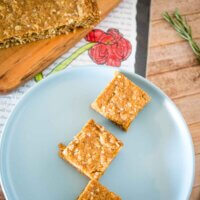 Freezer friendly, cut into squares and then freeze.