Falafels are such a cheap and easy food to make. They are crunchy, delicious and can be as spiced or not spiced as you like. These baked falafels have all the yumminess of their fried counterparts but are not as oily. Better still, these are gluten free and egg free!

I began making my own falafels as a handy in freezer treat a while ago. In fact one of my very good friends is Egyptian and together we went on a falafel mission, to make them and we were surprised by how great they turned out.

It has taken a while to convince the mini Kidgredients to eat falafels, so I took the opportunity to make them with Miss 4. An experience which usually means she will at least try them. And she ate 3 before deciding she didn't like them. Which probably means they are ok. 😉 but she won't admit it.

We had lots of them, so I decided to let Master 2 have a bit of a play around with them. He had a nibble or two, but wasn't overly impressed. The good thing with these is that they freeze really well, so you can always have them on hand.

How to serve them? Well, I have been known to eat them on their own, but they are also great as a sandwich or wrap filler, or dipped in hummus or tzatziki. Gosh, we have even had them with dinner!

Now, I have a really nifty tool that I call the falafelinator. But it's not essential, we made some using the rice moulds that Master 2 is holding in the picture, just make sure you wet them before you attempt to squish the falafel mix into them or they won't come back out!

And a note on food processing, you don't want to blitz these so much that they become hummus, you're looking for the consistency of cous cous. Also, please don't fall into the temptation of using tinned chickpeas, although it may seem easier, you won't achieve the required texture in making the falafels. 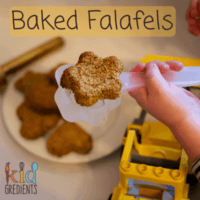