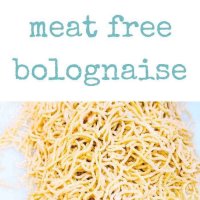 This post is sponsored by Philips, but all the opinions in it are mine. I decided to try something new for meat free Monday this week and we had caulinaise. Basically, bolognaise but made with cauliflower instead of the usual mince meat. Why bother? Well, we all need to eat a veggie meal more often! So this one was even enjoyed by Mr Kidgredients who is an ardent meat lover. We were sent a pasta maker to review by Philips and so I made fresh pasta to go with the sauce.

I don't know if you've ever had fresh pasta, but the difference between fresh pasta and the stuff you buy in a packet is dramatic. I have been fortunate enough to have fresh pasta within minutes of making when I was in Italy, and this has meant I have had a lifelong love of the fresh stuff. Now let's be honest, fresh pasta isn't something us Mums have time for of an evening, but the philips pasta maker is a game changer for that.

I'm no newbie when it comes to pasta machines, I have a manual one, an extruder, and two pasta attachments for my kitchenaid mixer. In fact I used to make fresh pasta with whole classes of kids when I was teaching primary school. I really thought that life wouldn't change that much when I became a Mum and that I would have time for pasta making with my little darlings around. How deluded was I?

Anyway, my pasta machines? They languish in the cupboard and we get them out in the holidays to make pasta. It's not an every night thing. It's not a once a week thing. It's barely even a once a year thing.

We have made: dumpling skins, spaghetti, fettuccini, and penne since it arrived. If you're used to making your own fresh pasta, you might find this a big change when you move to the Philips, because it looks like it isn't turning to dough, but because the machine extrudes, it doesn't need to turn it into a cohesive dough before it starts to push pasta out the front. It does literally make fresh pasta in 15 minutes. That means, you can start your sauce and pasta at the same time...and they will be ready to eat at the same time!

There are a few things I've learnt: make sure to follow the directions closely as even getting one step out of order can mean emptying the machine and starting again. But that's mainly my fault, I like to jump into to something and instructions aren't my friend! The other thing I've learnt: it's pretty accurate on it's measurements, but sometimes you may need a little extra water (up to about 15mls) to get things going.

Now this isn't a cheap kitchen toy, it's one for the serious pasta lover, but it will mean fresh pasta is quick and easy for you- made and ready to boil in 15 minutes. There are gluten free recipes in the booklet and egg free as well. But something I'm really looking forward to is trying to make pad thai noodles with it.

But hey...what's a pasta without a sauce? Nothing! So try out this amazing caulinaise sauce and you'll be converted your meat free Mondays will never be the same again!

Try these other bolognaise recipes I created that your kids will definitely love and enjoy: 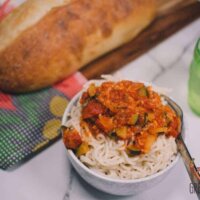