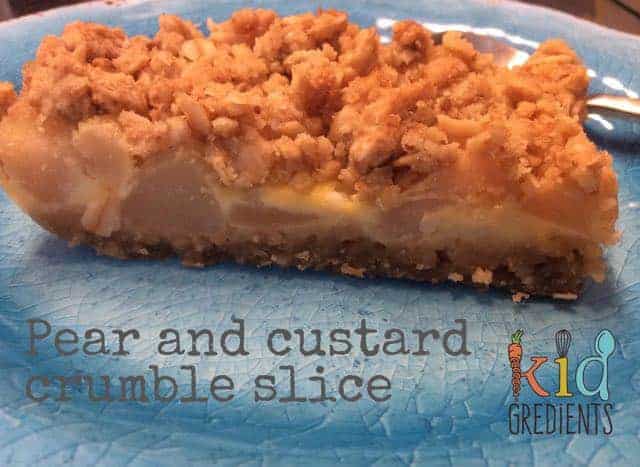 A while back I took Miss 4 to a cafe and we had afternoon tea.  She chose a Pear and Custard slice.  It was three layered, the base (crumbly and yummy), the middle (custard and fruit) and a the topping which was like a crumble.  We were sharing, but she ate most of it.  It was really yummy and I thought we could achieve something similar at home.  Thus the pear and custard crumble slice was born.

This is a treat, and is delicious as an afternoon tea or the end to a nice lunch.  It’s also easy enough to make with the kids as it custard bit isn’t done on the stove (lot’s of fiddling went into that bit!).  Miss 4 loves being in the kitchen, but quickly loses interest when something goes in the oven for ages and she has to wait.  The great bit about this one is that there is time between each baking where she gets involved again.  Which means she manages to maintain interest for the whole time.

I lined my tin with my silicone baking sheets, but it could be just as easily done with baking paper if you use that.  I kept the slice in a container in the fridge as I was a bit icky about custard being at room temperature.  The whole family gave it their tick of approval, even Master 2!

You could subststitute the fruit in this for stewed apples, peaches, plums, any fruit that copes well with cooking.  For that matter you could use strawberries or raspberries too, but they won’t need to be stewed first.  I think an extra nice touch would be to put some sultanas throughout the pear and make it more like a danish…but Mr Kidgredients doesn’t like sultanas in baked goods.

Previous Post: « Dam good day out- Cordeaux Dam
Next Post: I’m not going to the supermarket with my kids »