This year was the first year since her second birthday that Miss 6 has had her own party. We have always combined the parties as the kids are only 2 years and 2 weeks apart. But this year, we wanted to make a special party for Miss 6 with 6 of her school friends. We will have a bigger, family and friends party for Master about to be 4 next week. This is my guide on how to pull off a cheap and memorable birthday party.

First of all, this was a party for 7 girls, if you are working with larger numbers, it will cost you more, but this will form a basic guide as to what you'll need to pull off something similar. We held the party in our sunroom, a great addition to the back of our house that gets used for events like this. We most especially had to use it this year as we are about to dig up the backyard! So decorations. Because we were going with a frozen theme, it was fairly easy to source decorations, but at the same time, I didn't want everything to be licensed stuff as a) it's more expensive and b) it can look a little tacky if everything is licensed. So what did I buy?

So for decorations, we came in at about $40. The great thing about all the blue stuff? Well, it's staying up for Master 3's minion party! So realistically, those things cost half as much because they are being used twice. 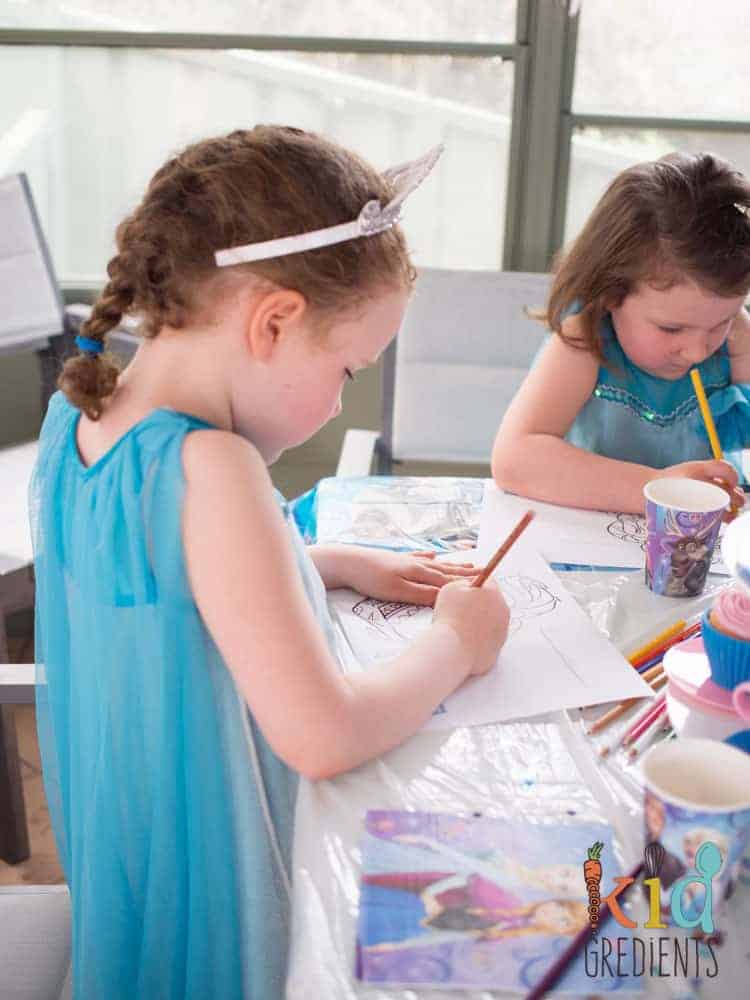 Then activity wise, I've realised that it's much easier to keep the kids entertained and that they will enjoy it more. So we had a few activities. Each child started by colouring in a frozen printable I had printed on A4 paper. I put at little box in the corner saying thanks for coming to the party. When they finished colouring, I laminated them: instant take home placemat that is a memory from the party and a bit of fun. 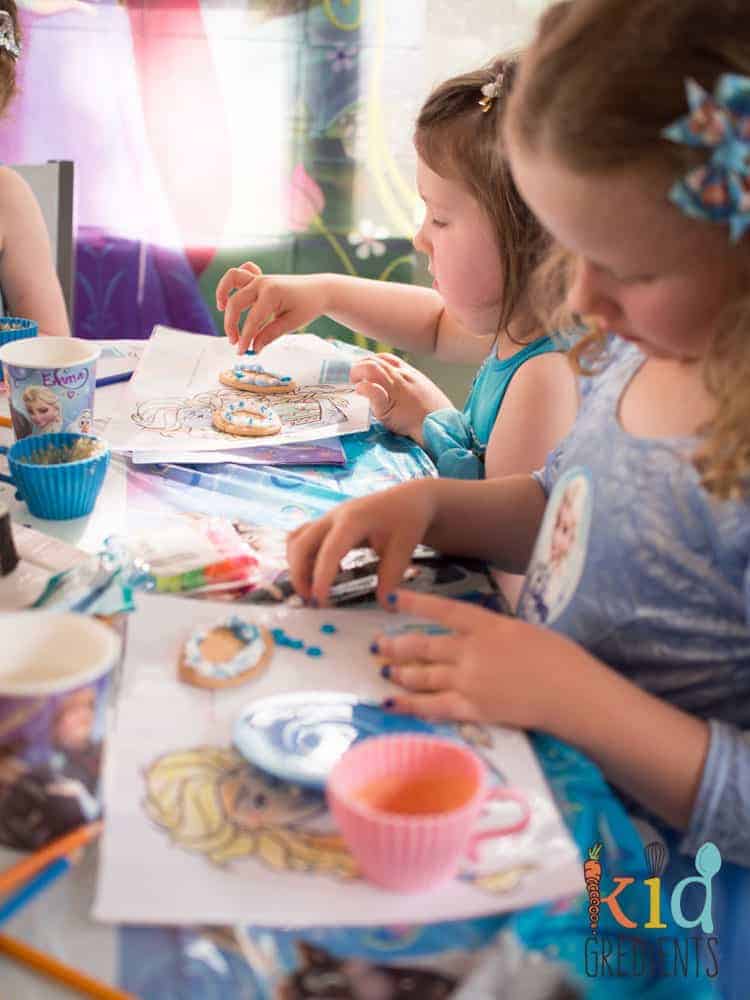 The next activity we did was biscuit decorating. It's really simple to set up: get some sprinkles, a few packs of ready made squeezable icing and some milk arrowroot biscuits and you're good to go! The kids had lots of fun creating their own biscuits and they were given the option of taking them home (I had small cellophane bags) or eating them whilst they were there. I bought the sprinkles when they were on clearance at aldi after the party specials they had earlier in the year, and the icing bags were new at woolies and were reduced to $2.00 each. We also made fruit and veggie skewers, why do all the work when the kids will have fun doing it? sure I chopped up the fruit and veg and washed it, but apart from that, the kids had lots of fun making them themselves. We played pass the parcel, which is a good way to get away from the table. The parcel had a collection of different prizes, rubbers etc from kmart- hot tip- buy multipacks and split them up! It's important at this age to make sure everyone gets something, so we had the right number of presents in the parcel- which we wrapped using wrapping paper left over from presents. We played freeze, another freebie game! It's good fun, and the girls were surprisingly good at it. It was hard picking a winner, but I had little playdoh tubs and also hairclips available for the winners. Finally we had a game of pin the nose on Olaf, that the girls really enjoyed, another $2.50 game from the junk store. The most expensive activity was the fruit and veggie skewers and I spent about $20 total on the games. This year for food I made sushi, made cheese pizza scrolls, made sandwiches and cupcakes. And I outsourced the cake (here's one I made last year, but I've realised I take on too much). The amazing Sarah from Dreaming of Cupcakes Sydney made the gorgeous crown cake and matching cupcakes. The cake doesn't look as amazing as it did in real life as I've edited it to remove my daughters name. I spent about $15 on food, most expensive was the cucumbers for the sushi! I already had the nori, but only used 4 sheets for the sushi, so it ended up quite cheap. My biggest expense was the cake- $120. We had a lolly bar so the kids could choose their own: maltesers, blue lollipops, blue smarties, jelly beans and love heart marshmallows. In their party bags there were pencils, erasers, small playdoh tubs and a frozen chocolate. I spent about $20 on the lollies as I bought them from a wholesaler. The playdoh tubs were leftovers from years ago when I bought a massive pack from Costco. The pencils came from daiso (8 for $2.80) and so did the erasers (10 for $2.80). The frozen chocolates were a 6 pack for $1.50 at the reject shop. So realistically, a party doesn't have to be a big expensive affair for it to be memorable and enjoyable for all! The kids all really enjoyed it and I'm glad I pulled it off!

Want to see some other kidgredients parties?