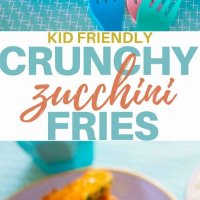 The original post of this was written in February 2015 and so much has changed since then...mainly my photos! So I've updated this post on 28/9/2017 to have shiny new photos and giving it a new lease on life because these zucchini chippies are the bomb!

Master 2 used to eat zucchini. Then one day he decided, as toddlers do, that zucchini was quite obviously evil and was never going to be touched again. I get it into risotto by grating it and fried rice the same way, but on it's own...it just isn't happening right now. That is why the idea for these zucchini chippies had to work- green stuff isn't so bad when it's crunchy and yummy!

It wasn't worth the argument. But he loves crunchy stuff. I think that is part of the issue with zucchini- it is just too soft and sloppy. If you want to make them even yummier, serve with a side of tzatziki, it works so well with the crunch and makes the flavour completely irresistible!

So tonight I decided to experiment and make some zucchini chippies that quite frankly even the most hardened zucchini hater couldn't refuse. And he ate them. They are officially a keeper.

I know these are fried and I'm going to eventually try them baked...but I'm a little worried that they might just collapse and lose all their crunch. That's a test for another day! If anyone decides to bake them, let me know how they turn out. 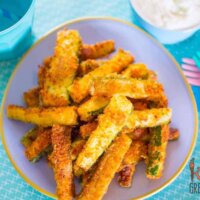