Coconut crunch bites- easy to make, fun to eat and super tasty.  So, I decided to make some little scrummy bites filled with seed and crunchy stuff to help satisfy the void of the no nuts rule in schools.  Kids still need crunchy stuff!  And I don’t want to resort to packets.  Likewise I don’t want to put other kids at risk.

I’ve seen a lot of people who aren’t impressed with the nut free rules in schools, and despite my kids loving nuts, I personally think the rule is awesome.  We just have to work out ways around it to give our kids crunchy stuff.  I guess unless you have a kid with a life threatening allergy or you’ve ever administered an epipen, then it’s hard to have understanding of it. 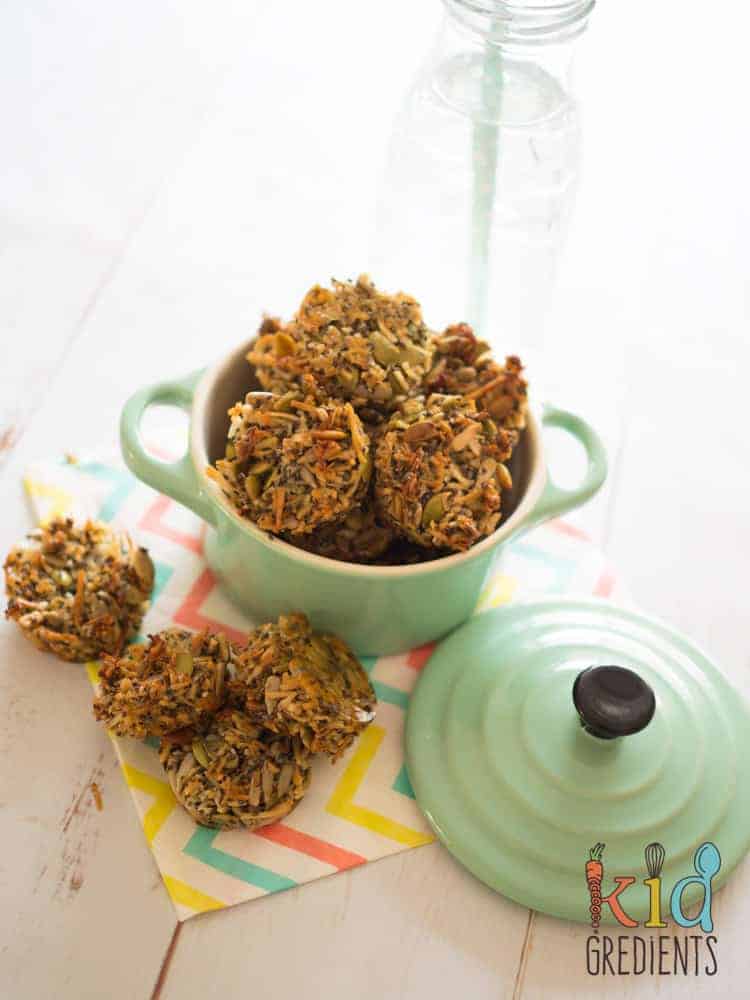 I have administered an epipen as a teacher and it’s not fun.  The situation gets out of hand really quickly and with a class full of kids you have to keep your cool whilst doing everything in your power to help the child who is going into anaphylaxis.  It’s not something you want to have to do.  It’s hard as a teacher, but I can only imagine how that feels as a parent, or even as a parent getting a phone call from the school to say your child is on route to hospital due to anaphylaxis.  We need to try and avoid exposing allergy kids to their allergens while they are young enough to not know better- and that’s why the rule is in place. These coconut crunch bites are awesome for putting some crunch into our lunchboxes and they only contain seeds and good stuff.  They are gluten free, nut free, soy free, wheat free and can also be made dairy free if you sub the butter for coconut oil, which works well, but then they will need to be refrigerated.  If you want them to be vegan as well, just switch out the butter! These are also freezer friendly and keep well in the fridge. and because they make 18 in a batch, you’ll have plenty to go around.

You may also try these other delicious snack bites that I posted:

To make them dairy free: replace the butter with the same amount of coconut oil.