So Christmas. It brings a massive ham to our place. We'll do our best to eat it, but even with our best intentions, there will come a point in time when the mere thought of Christmas Ham in its purest form brings a feeling of overwhelm and an accompanying feeling of dread. That's where Green Veg and Ham fritters come in! They are gluten free, delicious, packed full of veg and they use up the extra ham that you've got post Chritsmas Day.

These fritters use besan flour- which is made from chickpeas. It's also known as gram flour and chickpea flour and you can normally buy it in the free from section of the supermarket or health food stores, or asian supermarkets. It's kind of creamy in colour and is gluten free. Not only that, but it's really good for you and contains heaps of fibre!

If you don't need these fritters to be gluten free, by all means swap the besan for the same amount of plain flour. They won't have quite as much flavour, but they will work and they will still be yummy. I've used normal ham to make these as we haven't had our Christmas ham yet, but finely chopped Christmas ham would be perfectas it has so much flavour.

Don't feel restricted by the veggies I've used, the zucchini and baby spinach are what I've used because they are in the fridge. Use what you've got! Grated carrot would work as would any other leafy green to substitute for the baby spinach.

These freeze well too, so they will keep for a month once frozen, hence using up some of the ham for a time when you're no longer sick of it! They would be yummy for lunches too!

Want more of these veggie fritters? You can try some of my fritter recipes: 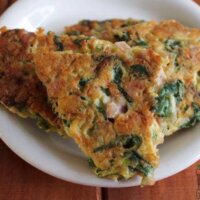